The exhibition showcases the three artists who participated in this year’s residency program at Musrara. During the month-long residency, each worked on a special project that connects the range of their artistic activity to the themes and contents that arose during they stay, as they acquainted themselves with the surrounding neighborhood and it inhabitants, history and visibility. During the festival, each presents her work individually in the Social Gallery. The display allows us a glimpse into artistic processes through fragments, elements and sequences from ongoing work, along with instances of previous works and series by the artists.
Orly Almi is an artist and choreographer who stages participatory happenings and performances in connection with audiences. In recent years she introduced foods into her work, addressing it across various aspects and the stages of preparation it entails. Through this preoccupation she touches on themes related to place, community, multiculturalism and feminism. Almi departed from the Jerusalemite myth of the Hubeza. According to local tales, during the siege on Jerusalem, children and women would pick Hubeza leaves and cook dishes from them, thereby preventing hunger. The project acquired a new dimension as Almi arrived in the neighborhood and began touring its streets. As she met with locals and exposed herself to the architecture and atmosphere, a new project was born, titled Within Thy Gates: A roaming event in the streets of Musrara, with narrated walks departing from the neighborhood’s gates and leading to its inner alleys. The various tours will converge in a performative culinary event in the communal garden at the heart of Musrara. In the gallery, Almi presents materials compiled during her work on the project, including texts, photographs, sound recordings, and two short videos that follow the project from two different angles – one made by herself, and the other by Dutch artist Inge Meijer. 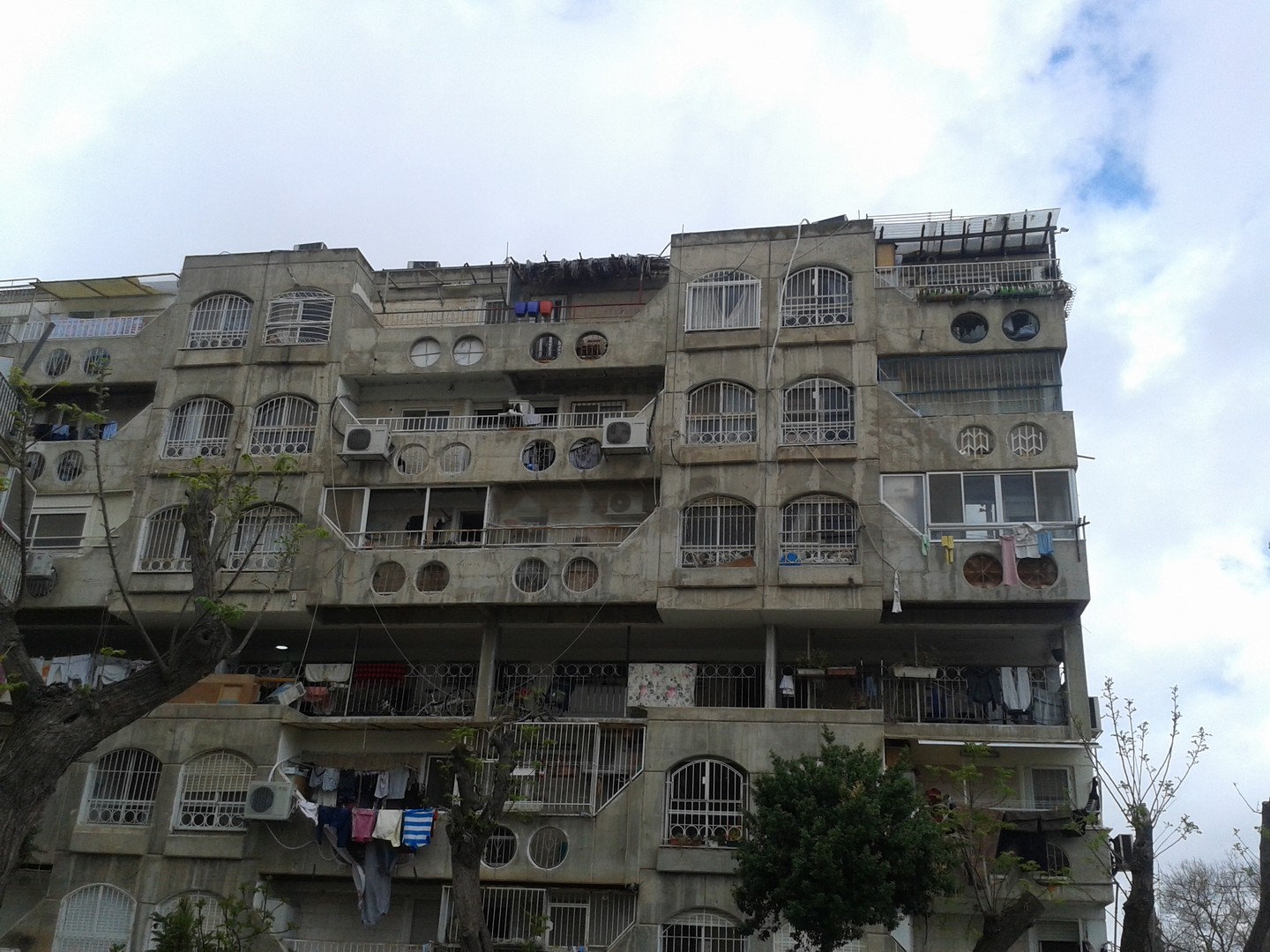 Born and raised in Fuzhou, China, in recent years Ma Li has been living in Berlin and San Francisco. A multidisciplinary artist, she works in drawing, sculpture, installation, video and performance, investigating the possibility of connecting the collective with the individual through installations that come to life through audience participation and giant happenings which she terms “techno tai chi”.
In Musrara, Li has created an ad-hoc community of artists from various disciplines, among them Musrara students and alumni. The joint multifaceted project they form, titled Surah-am-ma, combines rituals, folk tales, drilling exercises, performance and club culture. Edited from a series of filmed performances held at various locations in the city and its vicinity – such as the Sherover Villa, Jaffa Street, the Mamilla Pool and the Dead Sea – the video sequence is integrated into the project’s concluding performance, due to take place at the main stage on the Festival’s opening day. The giant concluding performance, of which the video is part, incorporates items and materials collected from around the neighborhood to form a large structure that sound emanates from, meant to blend with the sounds and actions arriving from the audience. In the gallery, Li shows several of the filmed performances, to be joined later, as the festival ends, by a documentation of the concluding performance. 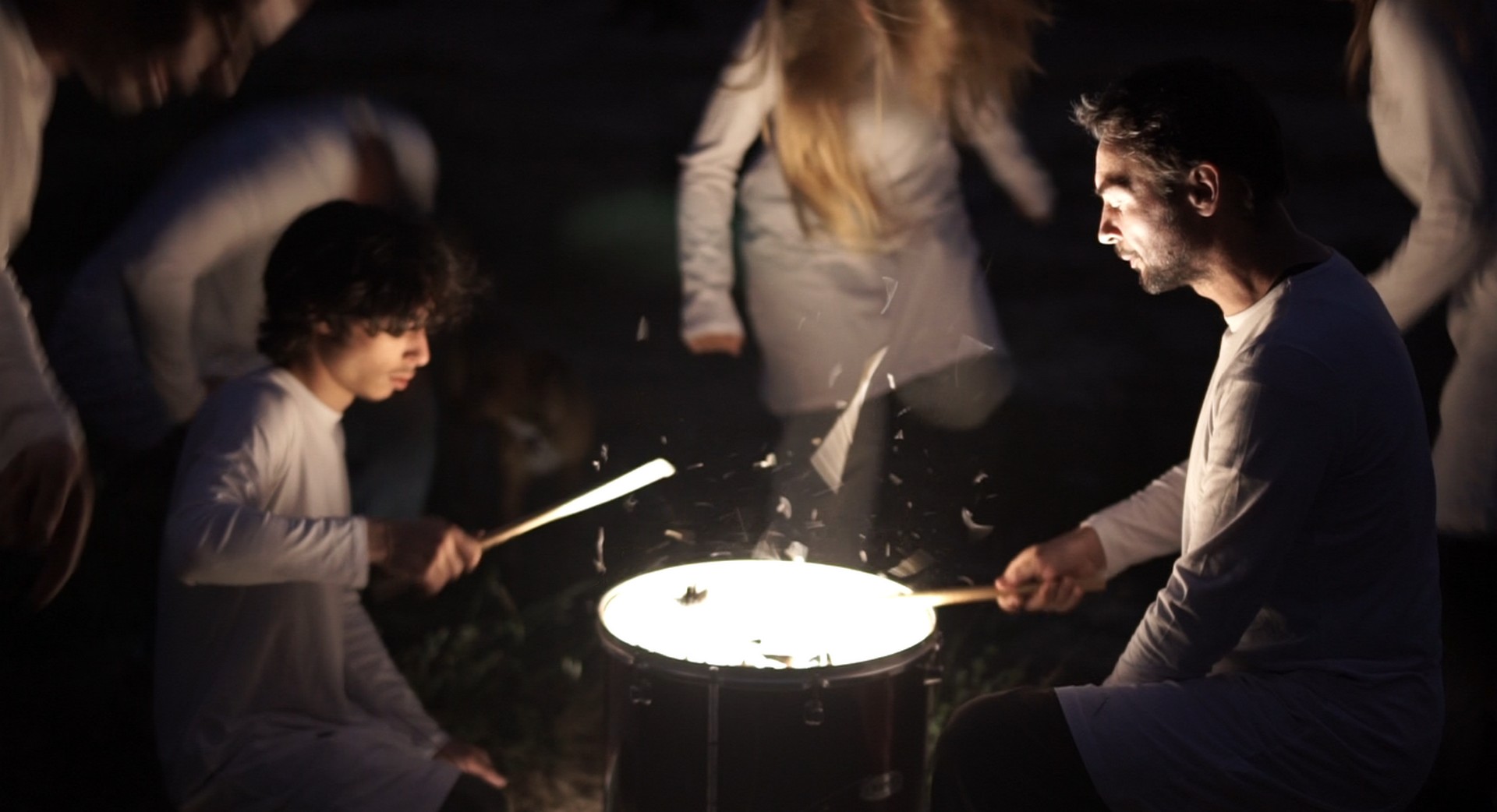 Natalia Mali was born in Dagestan and lives in London. She is a multidisciplinary artist, working in photography, installation, performance and video. Rooted in the post-feminist discourse, her work deals with the complicated negotiation of the conservative viewpoint of her native Dagestan with European values of women’s rights, liberation and feminine empowerment. Mali’s birthplace, at the Northern Caucasus, is an ancient crossroads of Islam, Judaism and Christianity, and she describes herself as a hybrid, post-colonialist personality. Arriving in Musrara, Mali looked for stories and individuals she could connect with to begin work on a project that ties reality and fantasy. When she entered the home of Koko Deri, a Musrara resident, she was taken in by his personality and by the improvised palace he had built for himself, overlooking Eastern Jerusalem. Mali edited Balagan Mon Amour, a collection of live performances performed to the camera, some spontaneously. The video can be seen in the festival’s courtyard exhibition. In the gallery, Mali presents The Bride, aseries of photographs depicting a ‘phantom bride’ –a middle-aged woman who fantasizes about an idealized husband. The groom appears as a different male archetype in each of the series’ five photographs, while the bride always remains in the same position, a posture associated with the iconography of the Virgin Mary in painting. However, the purported innocence of the bride is rather ambiguous, giving a double meaning to the work. Along with the series, Mali presents an additional video created in conjunction with Avigail Tsadik, a student at the school’s Department of Photography. 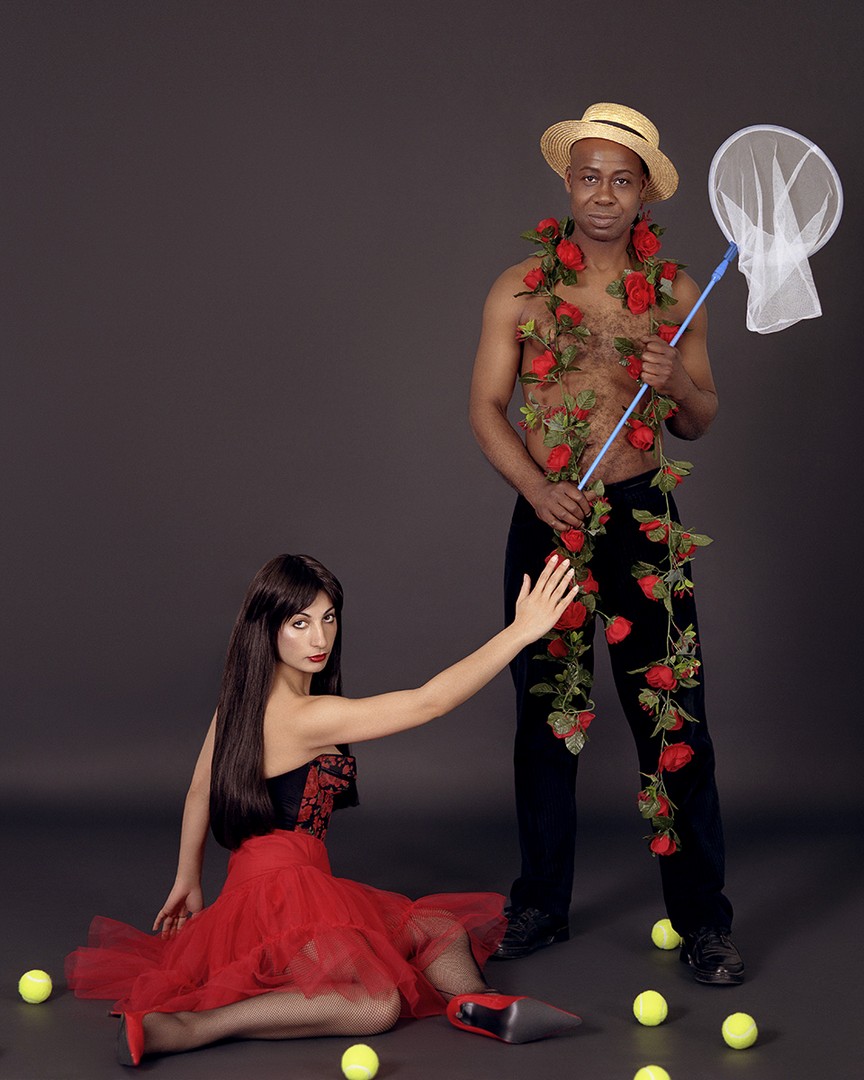